Kolkata (formerly known as Calcutta*) in the morning, as viewed from my hotel room on a business trip. 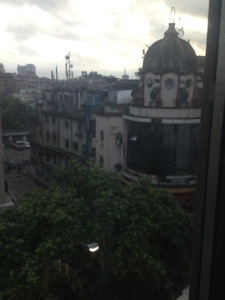 *Many cities in India have been renamed to undo the bastardisation of the original, indigenous names by the British under colonisation. Calcutta became (or perhaps it is more politically correct, to say “reverted back to”) Kolkata in 2001; Bombay to Mumbai in 1995; Madras to Chennai in 1996. Bangalore has been proposed for renaming to Bengaluru but I am a little fuzzy on the official status of that (although the airport is officially named as “Bengaluru International Airport”). Despite these changes, use of the colonial names persists in common speech, signs, maps, news reports, etc. so in effect many places have 2 practically interchangeable names today.