The Temple of Belur (along with its nearby neighbor, Halebeedu) is considered an “outstanding example of Hindu architecture” and the “Supreme Climax of Indian Architecture,” among other praises. It is extraordinary. 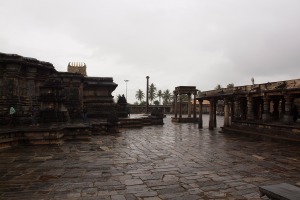 It is also an active temple, which people still visit for religious purposes. People like our newest little acquaintance, Nikta: 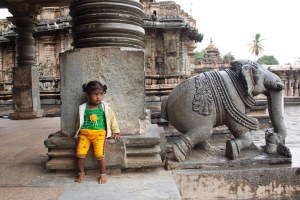 Belur was the capitol of the Hoysala Kings (who also built the Keshava Temple at Somnathapur, see my earlier post). And, as I’ve previously mentioned, the Hoysala were an important dynasty in Southern India from the 10th through the 14th centuries. At the peak of their reign, they controlled the entire area now know as the state of Karnataka, plus parts of the neighboring states of Kerala, Tamil Nadu and Andhra Pradesh.

It is generally thought that the main temple, the Temple of Chennakeshava, marks the conversion of one of the Kings from Jainism (e.g., the people who built Gomata) to Vaishnavism (that branch of Hinduism that focus on Vishnu). There is also a competing theory that it celebrates the Hoysala victory over the rulers of Mysore. The temple was built in 1116, but the entire complex was constructed over 103 years. (Now that’s a construction schedule!) The architects who worked here developed their own style, known as the Karanatak Dravida. (See my earlier post about Chamundeshwai Temple in Mysore, which has a gopuram in this style, too.) This is the Belur gopuram: 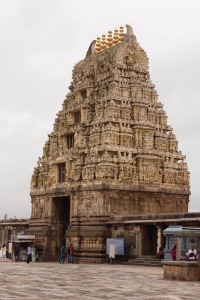 In front of the temple is the gravity pillar: 40+ feet tall, self supported and monolithic. 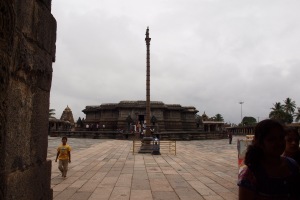 The temple sits on a base in the shape of a star and the exterior is craved in amazing detail. There are bands of elephants, lions, mounted horses, dancers, musicians, etc. 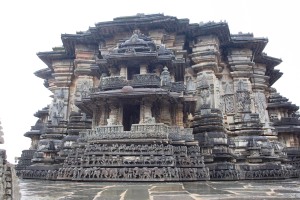 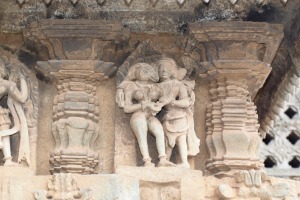 (This one has a donkey-headed woman, who is nonetheless celebrated as lovely) 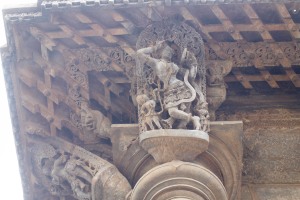 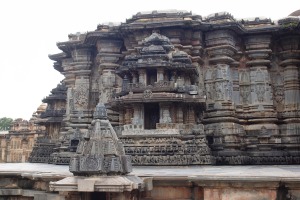 At the entrances, there are depictions of the “crest” of the Hoysala Kings: Sala (the first king) famously killing a tiger. 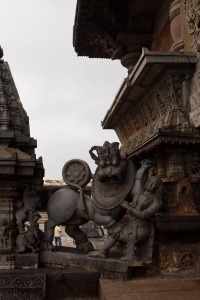 Inside there are more of the smooth, lantern shaped columns seen at other temples, as well as some really lacy ornate ones, too. The lotus-inspired ceiling is breath-taking. There is only one idol in the main temple, that of Keshava (one of Vishnu’s 24 forms) — but you are not allowed to photograph the main idol. 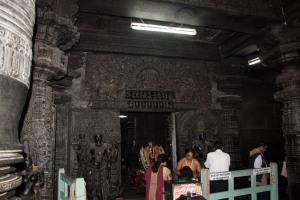 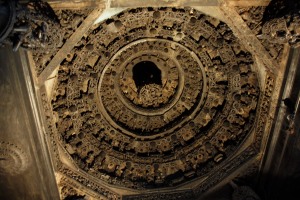 There are several smaller temples around the main one. This is the temple chariot with some other ceremonial animal figures: 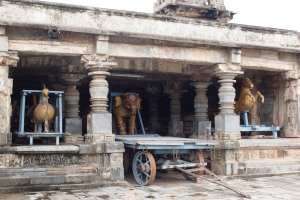