Exiting through the gift shop…

There is a branch of the National Gallery of Modern Art here in Bangalore and I visited this past weekend. Part of it is housed in a mansion formerly owned by the Mysore Maharja and it’s connected by breeze ways to modern additions, with sculpture gardens and a reflecting pool interspersed. There were 2 visiting collections. One was titled “Homelands” and featured various artists’ notions of what makes home home. It included a work by Susan Hiller regarding 25 extinct/endangered languages represented by phrase on oscilloscope (like an EKG) and recordings of the languages made into a movie, “Last Silent Movie”. One of the languages was Cajun French…. Small world.

The other special exhibition was called “The Last Harvest” featuring paintings by Rabindranath Tagore. The exhibit is traveling India in honour of what would have been his 150th birthday. It is pretty impressive collection — especially when you learn that he didn’t start painting until he was 67 years old! I guess it’s never to late for a new career. I also learned that he never titled his work, he wanted the viewer to draw his/her own impressions from the art.

For those of you mislead by the title, these are the best I can offer, from walls in the French Quarter of Pondicherry: 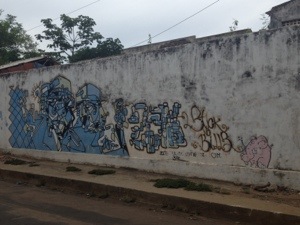