Today is Independence Day, aka “I-day”! It is the 67th anniversary of India’s freedom from the British Raj. For so ancient a culture to be such a young country is hard to wrap your head around. Cheers to young (ish) democracy!

By the time I turned on the TV news around 7:30am, the Prime Minister was already giving his I-day speech from the Red Fort in Delhi. It sounded a lot like a state-of-the-union address: percent economic growth, food security initiatives, warnings to Pakistan, etc. As the camera panned the audience, you could see all the troops at attention; a section of the audience dressed in all white, all green, and all orange, arranged like the flag; and various dignitaries in different states of alertness, ranging from rapt to asleep. (Seriously, if you are one of the only white dudes in the audience, and you’re important enough that your presence is required at the Capitol’s I-day celebration, then PLEASE do not fall asleep –it’s not a good look on national news! Your bright whiteness and western suit make you jump off the screen among the sea of Indians, you HD-sleepyhead!)

This morning I took the metro to Field Marshal Manekshaw Parade grounds to see how Bangalore celebrates. (Since it’s a holiday, C has the day off!) I read in the paper that it was best to arrive early to get through the security checkpoints and secure a seat in the public grand stand. Public seating seemed to be my only option since I am not a Freedom Fighter (!!!), veteran, VIP, or VVIP (seriously, VVIP is a real category! Not just something made up by a Kardashian!!). It was standing room only once I got there.

When I arrived things had already kicked off and the grounds were filled with children/pre-teens in military like uniforms. Some wore sashes with school names and others seemed to be boy and girl guides (boy scouts & girl scouts). Those poor kids ended up standing around for over an hour, although we had good weather — overcast and slightly cool.

Next came speeches, all building to the highly anticipated 9am raising of the “tricolor” (national flag) by Karnataka Chief Minister (Governor) K. Siddaramaiah whilst an IAF helicopter was supposed to shower the crowd with flower petals. The speeches seemed increasingly passionate, the last speaker before the Chief Minister included some sort of call-back/chant and the crowd took the bait and hollered back enthusiastically. Most of this was in the local language, Kannada, so I don’t know what they were saying but it generated a lot of good energy. Then the MC came over the speakers to introduce the Chief Minister… but wait, no. He said that we were awaiting the arrival of the Chief Minister. And everyone sat back down. And waited. Seriously, the whole program came to a grinding halt. Talk about a buzz kill! (I do love that no one actually said the Cheif Minister was “late” — that phrase was artistically avoided.)

Finally, he arrived. (How can you be late when petals are to be dropped from a helicopter!?!?!) He started to raise the tricolour then there was a grand pause and the delayed helicopter arrived. The crowd cheered insanely! The helicopter dropped the petals like a fire fighting helicopter drops water: one giant bucketful. And since the grandstands were covered with cloth roofs, none of the petals actually reached the crowds. It was rather anticlimactic (although I confess I may have had unrealistically high hopes for the airborne petals!).

Next the Chief Minister inspected the colour guard & kids from a pope-mobile-like-vehicle. Then he gave a 45min+ speech. This was the CM in the pope-mobile as he got close to our section:

After that there was a lot of goose-stepping by the troops and entertainment (signing, dancing, etc.) from school kids. I had bailed out during the speech, but that allowed me to get some good photos from the metro: 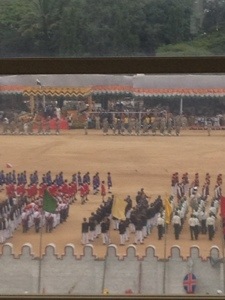 While crackers (fireworks) are used for lots of occasions in India, they are not associated with I-day here. Also, there are no barbeques or picnics. All in all, I’d compare it to a Soviet-era May Day (with more people, less weapons) crossed with a US-style Memorial Day, but all in all very different from July 4th.

I noted the rousing patriotism expressed through marketing– e.g., I-day themed TV commercials, newspaper ads, even this ground art outside a local restaurant:

One response to “66 years of Independence!”