The fort has a long history as it was the principal port of Ceylon*. It was known for its trade with the Chinese, Persians, Greek, Africans long before the Europeans arrived; but once they got here it was colonised and fortified by the Portuguese, then the Dutch, then the British. The majority of the visible fortifications today are from the Dutch, although the Brits added the lighthouse. The fort was actually reinforced (for defensive purposes) as recently as WWII. Today the fort and its surrounds are a UNESCO world heritage site.

I spent the afternoon poking around the ramparts and wandering the streets (all of which can easily be accomplished in an afternoon). Then I went to the roof top restaurant of the Rampart Inn to watch sunset — clouds low on the horizon impacted the view of the actual set, but the colours backlighting the clouds were better than my iPhone 4 camera could capture… Also, it was fun people watching as everyone in town — locals & tourists alike — seem to gather at the ramparts for sunset. 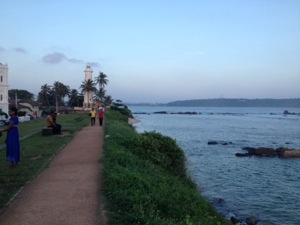 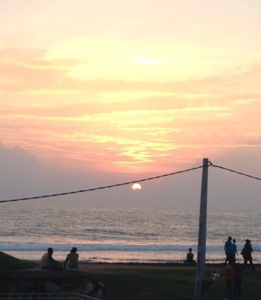 *”Ceylon” was the Island’s name during colonisation — a British bastardisation of the earlier Portuguese colonial name. It was replaced with Sri Lanka in 1972 when the island country became a republic. The “new” name, Lanka, is close to the ancient Sinhalese and Tamil (the major local languages) names for the island and to this the honorific “Sri” was added. While “Sri Lanka” is used for most governmental things, “Ceylon” is still used for the local tea — as almost everyone agreed this term was an important distinction and signified high quality among other teas in the world. Plus, as the #1 export, practically no one wanted to mess with renaming the tea and risk losing market share.