Today we explored Colombo Sri Lanka. Strolling the Galle Face Green, to the historic Dutch Hospital, old houses of Parliament, the Independence Memorial, posh Cinnamon Garden neighbourhood, etc. We spent a good amount of time at the Gangaramaya Temple, an important Buddhist temple, museum and education center. (Buddhism is the most common religion in Sr Lanka, with Hinduism, Christianity and Islam being visible minority religions.)

It’s quite a sprawling complex, despite the misleading small facade. The museum features gifts from devotees, everything from cooking utensils to jewerly to a Rolls Royce. It’s a pretty surreal display — housed in many rooms — of material things given the Buddha’s anti materialistic nature. Here’s N with his fave Buddhist artifact:

The worshippers circled the bodhi tree — the one here was taken as a sapling from Anuradhapura (Sri Lanka’s holiest city, whose bodhi tree was reportedly a sapling from THE actual tree under which Buddha attained enlightenment. ) As requested, we refrained from photographing the worshippers, but here are some general photos of the temple 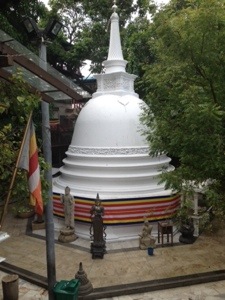 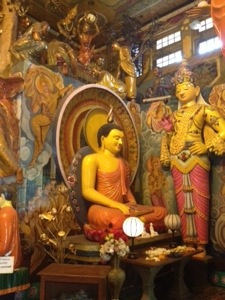