B’lore holds a lot of titles: Garden City, India’s Silicon Valley, Sandalwood (southern cousin to Bollywood), etc. And (drum roll) Pub Capitol of India. This appears to be due in part to a few demographic trends: (1) reportedly, workers here have the highest average salaries in the country and (2) >60% of the residents are younger than 25 years old. (Initially, I thought everyone LOOKED young, then I learned that they really ARE young!) Cheers to young (adults) with cash to burn.

When we came to look for housing a few months ago, we hit a couple of microbreweries. We recently visited a new(ish) one nearby, a “branch” of a Michigan brew pub started by a former UM student who move to Bangalore after graduation. Here’s a photo of their sampler of on-premises-brewed beers. All were pretty good. 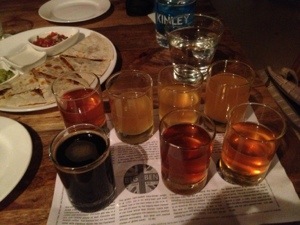